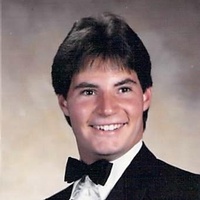 Dallas Gibson Jr. passed away surrounded by his family on the afternoon of May 10, 2019. Dallas was born on January 12, 1968 in Port Jefferson, New York to Dallas and Lesta Gibson. The Gibson family moved to Nashua, New Hampshire for several years and than settled in Springfield, Virginia in 1976. Dallas attended Robert E Lee High school where he lettered in both football and basket ball. Dallas also loved to play baseball and soccer. he was recruited to play football at James Madison University where he received a degree in Business and Finance. He was also an active member of the  Lambda Chi Alpha Fraternity.

Dallas married the love of his life, Lisa Lewis on May 5, 1997. Their beautiful daughter Logan was born in May of 2000. After a long hard fought battle with brain cancer Lisa passed away in October of 2003. For sixteen subsequent years Dallas helped choir a fund raising golf tournament for brain cancer research in Lisa's memory. Dallas remarried Kelli McWhorter in 2006 and their beautiful daughter Lindsay was born in June of 2008. Dallas spent most of his professional career working in the Auto Loan Industry.

Dallas proceeded in death by his mother Lesta F. Gibson (Dec 2011) and is survived by his two daughters Logan and Lindsay Gibson, his father Dallas Gibson Sr, his sister Tonja Cross, her husband Erich and their two sons Ben and Lance Cross.