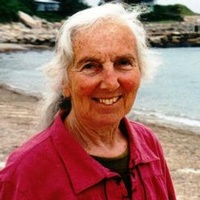 Ruth Hubbard Wald, a prominent biochemist and feminist who taught for many years at Radcliffe and Harvard and published numerous books on biology, women’s issues, and the politics of science died this morning (September 1) at her home in Cambridge, Massachusetts. She was 92 years old and died of natural causes, with her family around her.
Ruth Wald was born Ruth Hoffmann in Vienna, Austria, on March 3, 1924. Her parents, Richard Hoffmann and Helene Ehrlich Hoffmann, were both physicians and leftist intellectuals. Her mother was also a concert-quality pianist, and Ruth gave promising recitals on the instrument as a child, but then the Nazis arrived. In 1938, the Hoffmanns immigrated to the United States, settling first in Brookline, where Ruth graduated Brookline High School, and then in Cambridge.
As a pre-med student at Radcliffe, Ruth met her first husband, Frank Hubbard, and later recalled with pleasure the months they spent touring Europe together on his motorcycle as he researched historical harpsichords, before returning to the United States, where he became a leading instrument maker in the early music revival.
By that time Ruth had met George Wald, who was to be her second husband. They met at Harvard, where he was a professor of biology. Though both were married, they fell in love and maintained a quiet and passionate relationship over the next dozen years, while also working together and publishing many papers as collaborators, exploring the physiochemistry of vision.
Ruth’s marriage with Frank Hubbard ended in 1951, and in 1958 Wald divorced his first wife and they were married. Their son Elijah was born in 1959 and their daughter Deborah two years later.
The Walds continued to work together at Harvard and during summers at the Marine Biological Laboratories in Woods Hole. They also shared a deep love of art and literature, played music together, and traveled to Europe, Latin America, and Africa.
By the 1970s their main interests were shifting from science to political activism. After receiving a Nobel prize in 1967, George made a major speech against the Vietnam War and devoted much of his energy over the next decades to anti-war, anti-nuclear, and social justice issues.
Ruth had always been a committed radical – her parents were active socialists in Austria and her brother Alexander was a lawyer for the Black Panthers and the United Farm Workers—and she devoted most of her energies from the 1970s on to feminism, in particular as a feminist critic and historian of Western science. In 1979 she published Women Look at Biology Looking at Women, a collection of essays co-edited by Mary Sue Henifin and Barbara Fried, followed in 1990 by her own The Politics of Women’s Biology, and in 1995 by Profitable Promises: Essays on Women, Science & Health. She also wrote a critique of modern genetic technologies, Exploding the Gene Myth, with her son Elijah, and a dual autobiography and philosophical exploration, The Shape of Red: Insider/Outsider Reflections, with Margaret Randall.
After fifteen years at Harvard as a research associate and lecturer, in 1973 Hubbard became the first woman to be awarded a tenured biology professorship at the university. Her courses on biology and women’s issues shaped a generation of students.
Though she became less publically active after the death of her husband in 1996, she remained a familiar figure around Cambridge and Woods Hole, an indefatigable walker and swimmer with a mane of long gray hair. She continued to work with the Committee for Responsible Genetics, the American Civil Liberties Union, and other social justice groups, while also taking up poetry and painting and regularly attending classical music concerts.
She is survived by her son and daughter, Elijah and Deborah, her daughters-in-law Sandrine and Brooke, and her grandsons, Ezekiel and Oliver. A memorial celebration will be held at some point in the spring.